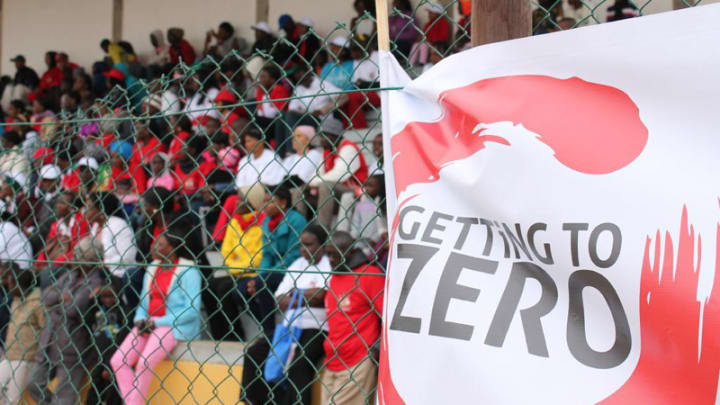 AMSTERDAM — Facing one of the highest HIV prevalence rates in the world, Namibia has become the first country in Africa to have more than three-quarters of its HIV-affected population virally suppressed — and insiders are crediting political commitment, good data, and community-centered HIV programs for the remarkable achievement.

According to the results of Namibia’s first ever population-based HIV survey, known as NamPHIA, the country exceeded many of the 90-90-90 targets set by UNAIDS in 2014. The targets call for countries to get 90 percent of people living with HIV diagnosed; 90 percent of those diagnosed accessing treatment; and 90 percent of people on treatment to have suppressed viral loads by 2020.

Most significantly, 77 percent of people living with HIV in Namibia are now classed as virally suppressed, which means they cannot pass the virus on to someone else. This is higher than the 73 percent target set by UNAIDS — and three years ahead of schedule.

NamPHIA was funded by PEPFAR as part of a data-drive to support similar population-based surveys in 15 other African countries to reveal gaps in HIV programming.

The results are especially impressive considering the scale of the challenge: Namibia has one of the world’s highest HIV prevalence rates with an estimated 12.1 percent of adults aged 15-49 living with HIV, according to the latest UNAIDS figures. While this represents progress — the prevalence rate was 14.3 percent in 2010 — Namibia still ranks fifth highest in the world in terms of its HIV burden, behind Swaziland, Lesotho, Botswana, and South Africa. HIV is also the leading cause of death in the country.

However, the survey also revealed major gaps in the country’s HIV response. Around 21 percent of people with HIV are unaware of their status, and this applied to almost 30 percent of men. In addition, the data showed that women aged between 15 and 24 are more likely to have HIV than men of the same age.

In response, Namibia is thinking hard about how to improve its HIV programs to better target men and young women, according to health minister Bernard Haufiku, who spoke to Devex on the sidelines of the recent AIDS 2018 conference in Amsterdam.

Haufiku said that broad political commitment on tackling HIV was key to the “exciting results” his country is seeing.

“We have political commitment at the highest levels … [and the support is] intersectional; even the minister of education is somehow involved in this,” he said.

The Namibian government pays for 64 percent of the overall HIV program and purchases nearly all antiretroviral — or ART — medications itself, the minister said. In 2014, the government reportedly spent $200 million on HIV, of which $71 million came from PEPFAR and $10 million from the Global Fund, the rest from domestic budgets.

“We spend quite a lot on HIV commodities and medicine … We don’t get donor money to buy antiretroviral treatment, it comes from our budget,” Haufiku said.

Namibia’s decision to purchase its own ART medications, without relying on PEPFAR or Global Fund dollars, is “unusual and encouraging,” according to Eric Dziuban, Namibia country director at the Centers for Disease Control and Prevention, especially when considered alongside other countries in the region, many of which rely on funding from external donors for more than 80 percent of their HIV response.

“There’s clear ownership [of the HIV program] … It’s not just someone else’s program running in their country; it’s theirs,” Dziuban said, adding that the government has been “a great partner in the funding and also monitoring and looking for ways to improve [the program].”

A second key ingredient to the country’s success is the existence of strong partnerships with PEPFAR and others in the field, Haufiku said. Working with these partners, especially through the population-based survey, has enabled the ministry to “actually map out what needs to be done” and then to “zoom in” and target five areas with the highest prevalence rates, he explained.

“We identified the [prevalence] hot-spots … and with the help of PEPFAR we targeted those areas,” the minister said.

A new way of testing for HIV

Recent changes to the way HIV testing is done have also helped Namibia reach the U.N. goals, according to Dziuban and others working in the country. While in the past, undiagnosed HIV patients were generally found by going door to door and testing people, the new approach targets the sexual partners of people newly diagnosed.

Known as index partner testing, the methodology was developed by CDC and rolled out in the country starting last year through local NGO DAPP, the first high disease burden country to do so.

Ib Hansen, chairman of the Humana People to People network, of which DAPP is a member, said the switch to partner testing had already led to more people being diagnosed and treated. Where under the old method, testers on average found new cases of HIV among 2 percent of people, this figure jumped to 7.7 percent last year with index partner testing, Hansen said. The approach is also credited with reaching a higher number of men than the door-to-door method.

CDC’s Dziuban said the switch was a good example of the ministry of health, and also donor agencies including PEPFAR, being willing to adapt their approach to deliver better results.

“The shift is an example of using data to show where we still have gaps and being willing to shift our programs, and that’s starting at the Ministry of Health level … being willing to adapt and be innovative … and our partners being willing to lead that process of shifting to something that we know will work better for where Namibia is today,’’ he said.

Lela Baughman, PEPFAR country coordinator in Namibia, told Devex that the U.S. funder now wants all of its implementing partners in the country to take up the partner testing approach.

“DAPP has had such great success [in Namibia] with this … so we are now moving all of our implementing partners to the DAPP model,” Baughman said.

Index partner testing has proved more effective at finding hard-to-reach undiagnosed people in part, because it is more targeted, but also because it is implemented by staff who are embedded in the local community and are able to build relationships, Hansen explained. This is linked to DAPP’s personalized and community-based approach to HIV programming, known as total control of the epidemic, which is designed to systematically reach each person in a community.

DAPP has been implementing this total control of the epidemic in Namibia since 2006, with testing and treatment services led by field offices, which employ local staff and volunteers who develop trusted relationships with the community and those living with HIV. These strong community links make it more likely that people will agree to divulge who their sexual partners are, and that those partners will agree to be tested, Hansen said.

Another element of total control of the epidemic is the “trio system” of support for newly diagnosed people, in which DAPP sets up newly diagnosed HIV patients with a support group of two friends or family members, who are tasked with helping keep the person on ART for the first six months. After that they can join a bigger support group of people undergoing ART treatment, Hansen explained.

While the Namibian results are impressive, minister Haufiku says there is more work to be done.

“The next [challenge] is to try and find those who haven’t been tested yet, especially young men.  We need to devise a strategy to make sure we reach them, offer them testing and link them to care,” he said.

More work also needs to be done to help young women, and to remove the structural barriers, such as gender inequality, which can make them more likely to contract HIV.

“We still have to make sure we empower young women to take charge of their lives … and make it more equitable in life for them,” the minister said.

This will also require a greater focus on prevention, including through the promotion of condoms as well as circumcision for men and boys, he said. The country has also started offering oral pre-exposure prophylaxis, or PrEP — a medication that can prevent the acquisition of HIV — to key populations, the minister said.

“It’s not just about getting data and putting people on ART, [there are a] whole range of prevention services,” he said.

The other big challenge is around sustainability, something the minister said he has raised with the head of PEPFAR.

“I was telling Ambassador [Deborah] Birx that, look, it won’t help us to do a one-off population based [survey] … We need to do these tests regularly, maybe every two years, until we come to the end of the epidemic,” he said, adding that Birx had agreed with him.

Haufiku is also negotiating with his own government for additional resources and said his ministry has just launched a new strategic plan which identifies a major HIV funding gap. But with bipartisan support for HIV programs within the Namibian government, he is hopeful he will get the funding.