The African Union (AU) Specialized Technical Committee (STC) on Justice and Legal Affairs has adopted the Model Law on Medical Product Regulation in Africa during its meeting held in Addis Ababa, Ethiopia from 12 to 13 November 2015. The Model Law is aimed at providing a framework to support member states and Regional Economic Communities (RECs) in their endeavour to strengthen and harmonise regulation of medical products. It offers a comprehensive guide to AU member states in the review and development of national legislation on medical products regulation. The Model Law also supports the creation of an enabling regulatory environment for the private sector to deliver quality, safe and efficacious medical products and technologies to the African population. The Model Law has been developed to support the achievement of the public health and industrial development goals through the African Medicines Regulatory Harmonization (AMRH) Programme, implemented as part of the Pharmaceutical Manufacturing Plan for Africa (PMPA). The AU Member States, working through their respective RECs are harmonizing medicines regulation and facilitating work-sharing among countries for faster, quality, predictable and transparent approval of medical products in African countries. Harmonization is expected to increasing access to good quality, safe and effective medicines to the African population. 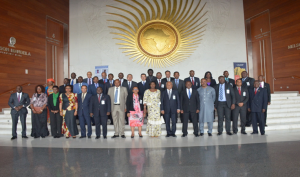 Ministers of Justice and Attorney Generals of the African Union