A new regional program focusing on legal and policy change in Africa has been invited to proceed to grant-making. The $10.5 million program aims to strengthen access to services for key populations in 10 countries – Botswana, Cote d’Ivoire, Kenya, Malawi, Nigeria, Senegal, Seychelles, Tanzania, Uganda, and Zambia. As previously reported by Aidspan, this is one of thirteen regional concept notes approved in September to proceed to grant-making.

The concept note was submitted jointly by the AIDS and Rights Alliance for Southern Africa (ARASA) and Enda Santé, and proposes the UNDP as principal recipient. The ARASA/Enda Santé concept note is unusual in several ways. First, it is highly focused on just one implementation module – removing legal barriers. Activities will include conducting legal environment assessments, engaging in strategic litigation and overseeing small advocacy grants at country level. The program would fill an important human rights deficit in the Global Fund’s current investment portfolio.

The Fund’s 2012-2016 strategy commits to increasing spending on programs that address human rights barriers to accessing health services, but implementing this in practice has been challenging. Although the majority of concept notes submitted do identify human rights barriers, few actually request funding to address them (Figure 1).

Figure 1: Proportion of concept notes submitted in the first five windows which contain human rights analysis compared to those which request funding for the removing legal barriers module 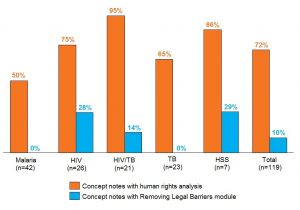 As a result, out of all concept notes submitted in 2014 (worth some $7.9 billion), just $17.5 million was requested to address human rights barriers. More than half of this amount was an above allocation request, signalling low prioritization of the removing legal barriers module.

If approved, the proposed $10.5 million for the ARASA/ENDA Santé concept note will be one of the single most significant human rights investments that the Global Fund will make since the beginning of the new funding model. “There’s a lot of pressure on us,” says Michaela Clayton, Director of ARASA. “It will set the tone for the Global Fund’s willingness to fund human rights programs in the future.” The Global Fund has been careful not to bill itself as a human rights organization, despite emphasizing the close connection between human rights and fighting the three diseases.

Inherent in programs like these are longer-term outcome targets, such as setting judicial precedent and influencing policy. Given the three-year timeframe for Global Fund grants, this creates a number of challenges for measuring success.

“This is a human rights grant,” says Deena Patel, who would be the UNDP’s start-up manager for the program. “We all know that a lot of the work takes a long time and we can’t always predict the outcomes.” Clayton adds that measuring changes in laws and policies is also not always a good indication of progress: “You can say ‘this law has been repealed’ but if sex workers are still being harassed by the police, what does that help? What we are trying to achieve is for the countries to be able to take on these issues.” Some of the specific targets for the program include: Along with a dedicated human rights focus, the program is unique in several other ways.

Being regional, it will have a wide geographic scope covering countries in East, West and Southern Africa. To help mitigate potential coordination challenges, sub-recipients have been strategically selected to ensure a presence in all three regions. Coordination with other regional programs will be particularly important given the numerous overlaps. An annual coordination meeting is planned to ensure that efforts are not duplicated with other regional grants, including those managed by the Kenya AIDS NGOs Consortium, Hivos and the Abidjan-Lagos Corridor Organization. Patel says that the multi-regional aspect of the grant will open up exciting spaces for pan-African human rights alliances.

“It’s rare that you see collaboration between West African and East and Southern African organizations,” she told GFO. “This program presents an opportunity to bridge that gap.” Clayton also highlights this particular value-add of the regional approach: “We hope that this will provide a working example on how different organizations can work together within a large region, or within a number of regions across a continent, on shared issues.” If the Board approves this program in the near future, implementation will likely start in January 2016.