Hijras and transgender people take part in the first ever Hijra Pride event on 10 November 2014 in Dhaka to mark the one year anniversary since the Government’s decision to recognize the ‘third gender’ in official documents. Photo: BSWS.

DHAKA – “I was so happy and excited that day. We worked so hard and for so long for this and it was finally becoming a reality,” recalled Shale Ahmed, a prominent Bangladeshi social activist and Executive Director of Bandhu Social Welfare Society (BSWS). In November 2014, one year after the landmark day, Shale and his organization, along with the Ministry of Social Welfare organized country wide ‘Hijra Pride’ activities to celebrate the anniversary of the Government of Bangladesh Cabinet decision to recognize hijras, or transgender people, as a ‘third gender’ on official documents. The announcement followed similar progress on legal recognition for hijras and transgender people in recent years in India, Nepal and Pakistan.

While the Government of Bangladesh still has yet to enact a specific law covering the rights of third gender people, the progress is considered significant for the rights of this long marginalized segment of the population. Legal recognition promises to contribute to improved access to social services that most people take for granted, such as access to health care, housing, education and employment. In Bangladesh, as in many parts of Asia, sexual minorities suffer from social stigma and discrimination that can hinder their ability to access important services. Rights violations can lead to poor emotional health and well-being and contribute to high risk behaviours, which put their health in jeopardy. “There are strong links between human rights violations, persistent stigma and discrimination and the elevated HIV epidemics that we are seeing among transgender people and men who have sex with men (MSM) across the Asia-Pacific region,” noted Nadia Rasheed, HIV, Health and Development Regional Team Leader with the UNDP Bangkok Regional Hub. “

A recent UNDP study on transgender people in Asia found that some locations reported HIV prevalence rates as high as 49 percent.” To address this, UNDP, through the Multi-Country South Asia HIV Programme (MSA Programme) supported by the Global Fund to Fight AIDS, Tuberculosis and Malaria, is engaging with National Human Rights Institutions (NHRIs) and civil society groups to promote and protect the human rights, including health rights, of these marginalized populations. Similar efforts are being undertaken in South East Asia under the ISEAN-HIVOS Multi-Country HIV Programme. In Bangladesh, the policy progress on recognizing ‘third genders’ was a result of rigorous and persistent advocacy by concerned stakeholders, prominently including BSWS, a sub-recipient under the MSA Programme, and the National Human Rights Commission (NHRC).

The Cabinet decision has enabled the Ministry of Social Welfare to launch country wide pilot programmes to develop hijra friendly services and also allocate a small budget for education stipends, vocational training, livelihood options and pensions for elderly hijra under their existing social protection programmes. Thousands of hijra and transgender people in Bangladesh will potentially be impacted. At a December 2014 consultation organized by BSWS, Dr. Mizanur Rahman, Chairman of the NHRC of Bangladesh, remarked on the state of sexual minority rights in Bangladesh. “Lesbian, gay, bisexual and transgender (LGBT) issues are not different from other human rights related concerns,” he said. “The rights movement has gained considerable momentum in recent years, however, the time has not yet come where we can talk openly and frankly about these communities.

It is high time we raise our voices to uphold the basic rights of LGBT people in Bangladesh.” In close collaboration with the NHRC and with support from the Embassy of the Kingdom of the Netherlands, BSWS initiated a legal help service named Ain Alap (‘Legal Talk’) in 2013 which provides easy access to information and assistance on legal issues through a telephone helpline service. The service contributes to ensuring access to justice for sexual minorities. Since its inception, some 954 calls have been received from 53 districts throughout the country, and 17 incidents of rights violations have been addressed. From 2015 onwards the service is being supported under the MSA Programme. 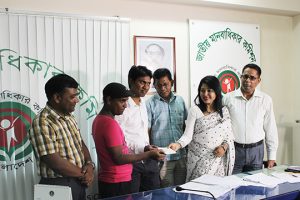 Sohel Rana (second from the left) receiving official notice of redress from the court in Dhaka. Also present in the photo are the Honorable Director of the NHRC, Additional District Judge, and representatives from BMSRI and BSWS. Photo: BSWS. In January 2015, the legal service succeeded in securing legal redress for Sohel Rana, a transgender who was unjustly terminated from her job at the Bangladesh Medical Studies and Research Institute (BMSRI) in May 2013 based on her gender identity. Following a ruling by the NHRC on the case, Sohel was awarded lost salary since the unlawful dismissal and was reinstated in her former position. “Engaging National Human Rights Institutions as a partner is key to advancing human rights issues, including ensuring equitable access to essential HIV and health services, for these groups,” said Shale Ahmed, BSWS. “We hope the innovative examples of success from Bangladesh can be shared and replicated throughout the region.” Through its human rights programming, UNDP is also organizing activities to bring together NHRI representatives working on sexual minority rights issues from across the Asia-Pacific region. “The regional component of our work helps to facilitate greater collaboration between civil society organizations and NHRIs and to increase their visibility and role in international HIV response and rights mechanisms,” said Nadia Rasheed, UNDP.

Most recently, NHRI representatives from 19 Asia-Pacific countries gathered in Bangkok from 24-25 February 2015 for a workshop organized by UNDP, Asia Pacific Forum of National Human Rights Institutions and the Asia Pacific Coalition on Male Sexual Health. The workshop produced an important action plan to further the promotion and protection of human rights in relation to sexual orientation and gender identity.