The Africa Regional Judges’ Forum on HIV, Human Rights and the Law convene for two days’ deliberations at Johannesburg (Republic of South Africa) on 14–15 October, 2014

The Africa Regional Judges’ Forum on HIV, Human Rights and the Law convene for two days’ deliberations at Johannesburg (Republic of South Africa) on 14–15 October, 2014

In Africa, the HIV epidemic has raised and continues to raise new and complex legal and human rights’ issues and challenges and engagement of the Judiciary in this issue is vital. There is wide recognition that the judiciary can play a critical role in generating jurisprudence that can uphold the rights of people infected and affected by HIV.

Responding to this, a number of Senior Judges across Africa expressed an interest in sharing experiences, challenges and new developments in HIV-related jurisprudence in order to uphold human rights, and to support and sustain judicial excellence on HIV and the law. As a result, the Africa Regional Judges’ Forum on HIV, Human Rights and the Law convened their initial meeting in Johannesburg, South Africa on 14th–15th October, 2014, with support from UNDP RSCA. Eleven senior judges from Botswana, Kenya, Malawi, Namibia, South Africa, Swaziland, Tanzania and Zimbabwe convened with a number of experts: lawyers, human rights activists and senior counsel to attend the meeting that covered two very fruitful days’ of deliberations. 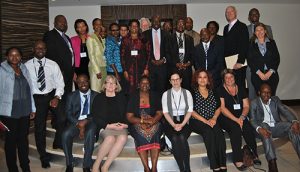 The deliberations covered a range of issues that included challenges current laws, and criminalising provisions pose in preventing access to HIV, health and other social services for women and girls, people living with and at higher risk of HIV and key populations that include MSM and transgender people, sex workers, people who use drugs and incarcerated populations. The key outcomes of the meeting included the following: