The 12th Meeting of the Network of Francophone Parliamentarians on HIV, TB and Malaria

The 12th Meeting of the Network of Francophone Parliamentarians on HIV, TB and Malaria

On 29-30 September 2014, the 12th Meeting of the Network of Parliamentarians on HIV/AIDS, Tuberculosis and Malaria was held in Kinshasa, Democratic Republic of the Congo (DRC).

It also seeks to raise awareness and promote concrete actions and activities in the continued responses to these pandemics, such as pressure for the allocation of necessary resources, the protection of human rights, the control of budgets allocation for public health and the facilitation of access to medicine. The gathering brought together 60 participants, with representation from Switzerland, Canada, Gabon, Senegal, Equatorial Guinea, Chad, Belgium, Cote d’Ivoire, DRC and the General Secretariat of the Assembly of the Francaphonie.

The President of the National Assembly of the DRC, Aubin Minaku, opened the meeting in the presence of the President of the Senate, Mr. Léon Kengo Wa Dondo. This was the first meeting of the network since it expanded its mandate to include Tuberculosis and Malaria pandemics. Participants engaged in discussions on human rights aspects in the response to HIV, Tuberculosis and Malaria and the effects of laws that criminalize the behaviour of certain key populations. The role that the members of parliament could play in this field was also explored.

Parliamentarians were reminded that most Francophone countries were “monist”[1] and consequently Members of Parliament must be aware of all the international treaties ratified by their countries as these have priority over their national laws in conformity with many Constitutions. Since principles of equality and non-discrimination are recognized and protected by these international treaties, Members of Parliament must be vigilant in continuing to avoid passing bills which would be of discriminatory nature towards certain groups of populations that are key to the response to the three diseases. 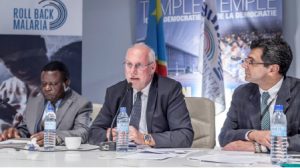 Closing ceremony, DRC Parliament   The project of the reform of the Congolese law 08/011 of 2008 on the protection of the rights of people living with HIV (PLHIV) and affected persons was also discussed during this 12th meeting.

One of the highlights of the conference was the intervention of the representative of Rollback Malaria, Dr. Makeng Kaput Victor, a current Congolese MP and former Minister of Health, who was in charge during the promulgation of the aforementioned law in 2008. Dr. Makeng promised in his capacity as the President of the Health Commission at the National Assembly to be an ally and champion the process by sensitizing his peers on the issues related to the reform of the law. During the second day of the meeting, UNDP shared its experience in supporting the Congolese Government, in particular on the development of a training manual on Human Rights and HIV in DRC, the support in the realization of the study on Stigma Index, the Legal Environment Assessment and the organization of the National Dialogue on laws, Human Rights and HIV in 2013.

The Network of Francophone Parliamentarians on HIV/AIDS, Tuberculosis and Malaria extended an invitation to UNDP to participate in upcoming annual meetings (previously the Network had worked primarily with UNAIDS). The 13th meeting of the Network will take place next year in Chad. There was a strong presence of the media at the meeting and the internet links below reflect some of the coverage that resulted:   [1] In pure monist countries, unlike in dualist ones, international law does not need to be translated into national law, rather it is just incorporated and has effects automatically in national laws. The act of ratifying an international treaty immediately incorporates the law into national law. International law can be directly applied by a national judge and can be directly invoked by citizens just as if it were national law. A judge can declare a national rule invalid if it contradicts international rules because, in many states, the latter have priority.