By Matthew Rimmer In July 2014, Melbourne hosted the 20th International AIDS Conference. The event opened, paying tribute to the late Dutch HIV/AIDS researcher Professor Joep Lange, with his image projected onto a screen, with the accompanying quotation: ‘If we can bring a bottle of Coke to every corner of Africa, we should be able to also deliver antiretroviral drugs’.


Fire in the Blood, Trailer, Documentary

In the Jonathan Mann memorial lecture, Michael Kirby — a champion of HIV/AIDS law reform, and a former Justice of the High Court of Australia — emphasized the need to reform intellectual property laws in order to tackle the scourge of HIV/AIDS. He has a longstanding interest in the topic. As he wrote in a foreword to a book on Intellectual Property and Biotechnology, battles over patents in respect of HIV/AIDS research have been waged since the 1980’s. Michael Kirby commented in his Melbourne speech:

Without changing the global laws on intellectual property, people will die needlessly. It is as simple as that. Someone must tell those who will not act, the practical facts of life in our world. They cannot expect taxpayers in other countries to shell out, indefinitely, huge funds for antiretroviral drugs if they simply refuse to reform their own laws and policies to help their own citizens.

Michael Kirby stressed that there was a need to value the human right to life-saving medicines. He called upon his friend, the Australian Prime Minister, Tony Abbott, to show leadership on law reform: ‘As a conviction politician and an unabashed conservative, Tony Abbott may be able to help us in this world to reach out to those political leaders, at the coming G20 Summit in Brisbane and in the meetings of the Commonwealth of Nations, to break the deadly logjam of inaction or wrong actions.’

Thus far, despite good intentions, Australia has been slow to implement its international obligations in respect of access to essential medicines. TheDoha Declaration 2001 and the WTO General Council Decision 2003 were designed to enable countries to make use of flexibilities under the TRIPS Agreement 1994 to address public health concerns — such as access to essential medicines in respect of HIV/AIDS, tuberculosis, and malaria. In 2013, the House of Representatives in the Australian Parliament passed a bill to enable to export of essential medicines to developing countries and least developed countries. However, before the Senate could debate the bill, Kevin Rudd won a leadership ballot against Julia Gillard, and Parliament was prorogued. As a result, the bill lapsed. The Coalition of the Liberal Party and the National Party won the ensuing election.

In 2014, the Coalition Government introduced a new bill, the Intellectual Property Laws Amendment Bill 2014 (Cth). To his credit, Bob Baldwin, the Parliamentary Secretary to the Minister for Industry, has shown a good understanding of the need for legislative action in respect of patent law and access to essential medicines. Baldwin emphasized in his second reading speech:

Schedules 1 and 2 to the Bill amend the Patents Act to implement the Protocol amending the World Trade Organization Agreement on Trade-Related Aspects of Intellectual Property Rights, also known as the TRIPS Protocol. The Howard government accepted the TRIPS Protocol in 2007 and its implementation in Australia is well overdue. The TRIPS Protocol helps developing countries that are suffering health crises such as malaria, HIV/AIDS and tuberculosis to obtain essential medicines from other countries at affordable prices. Millions of people die from such diseases every year. At present, elements of our patent system can make it harder for Australian businesses to provide assistance to such countries.

Baldwin noted: ‘To address this, the Bill will enable Australian pharmaceutical manufacturers to obtain a licence from the Federal Court to make generic versions of patented medicines and to export these medicines to countries with a demonstrated need.’ The Parliamentary Secretary stressed: ‘The scheme will ensure that patents can only be used under strict conditions and that patent owners are fairly compensated.’ Baldwin emphasized: ‘The scheme is also designed to be as easy to use as possible, while ensuring appropriate safeguards are in place and consistency with Australia’s broader international obligations.’

Genevieve Butler of the Australian Parliamentary Library has provided a useful overview of the bill. She noted:

There is international concern that patents should not be used as vehicles for healthcare monopolies. For instance, pharmaceutical patents may risk putting essential medicines beyond the reach of many people in need of treatment. Developing countries often do not have the capacity to manufacture the medicines necessary to treat epidemics such as malaria, HIV/AIDS and tuberculosis. The interim waiver and the WTO General Council Decision 2003 provide a mechanism to supply such countries with the medicines they need to address health epidemics.

Hopefully, this important legislative reform will be finally passed through the Australian Parliament, as a first step to address longstanding issues surrounding patent law and access to essential medicines. It is an opportunity for the Prime Minister Tony Abbott to demonstrate his leadership in respect of medical research, and medical treatment. 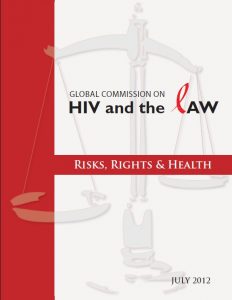 Intellectual property policy is a critical component of substantial, continued price reductions for ARVs, and of the ability of national governments to extend the implications of lessons learned in HIV to other areas of health. The ultimate implications, of course, are measured not in technical prose, but in people’s lives.

The Global Commission on HIV and the Law has a number of recommendations on intellectual property and access to essential medicines. First, the Commission asked the UN Secretary-General to convene a neutral, high-level body to review and assess proposals and recommend a new intellectual property regime for pharmaceutical products. The Commission recommended: ‘Such a regime should be consistent with international human rights law and public health requirements, while safeguarding the justifiable rights of inventors.’ Second, the Commission asked that ‘high-income countries, including donors such as the United States, European Union, the European Free Trade Association countries (Iceland, Liechtenstein, Norway and Switzerland) and Japan must immediately stop pressuring low- and middle-income countries to adopt or implement TRIPS-plus measures in trade agreements that impede access to life-saving treatment.’

Third, ‘While the Commission recommends that WTO Members must urgently suspend TRIPS as it relates to essential pharmaceutical products for low- and middle-income countries, we recognise that such change will not happen overnight’. The Commission maintained: ‘In the interim, even though individual countries may find it difficult to act in the face of political pressure, they should, to the extent possible, incorporate and use TRIPS flexibilities, consistent with safeguards in their own national laws.’ Fourth, the Commission argued that ‘The WTO Members must indefinitely extend the exemption for Least Developed Countries from the application of TRIPS provisions in the case of pharmaceutical products.’

Fifth, the Commission observed: ‘The August 30, 2003 Decision of the WTO General Council has not proved to be a viable solution for countries with insufficient pharmaceutical manufacturing capacity.’ The Commission maintained: ‘It is essential that the system established by that decision be revised or supplemented with a new mechanism, to allow the easier import of pharmaceutical products produced under compulsory licence.’

Finally, the Commission noted that ‘TRIPS has failed to encourage and reward the kind of innovation that makes more effective pharmaceutical products available to the poor, including for neglected diseases.’ The Commission commented: ‘Countries must therefore develop, agree and invest in new systems that genuinely serve this purpose, prioritising the most promising approaches including a new pharmaceutical R&D treaty and the promotion of open source discovery.’ 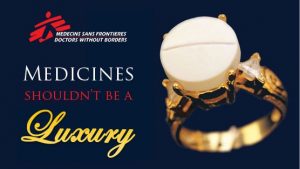 Médecins Sans Frontières (MSF) has been a longstanding champion of access to essential medicines. At the Melbourne conference, the Doctors without Borders emphasized that there is a need for concerted actions by countries to make HIV treatments more affordable. ‘Nearly 12 million people are now receiving antiretroviral therapy (ART) in developing countries’, said Dr Jennifer Cohn, Medical Director of MSF’s Access Campaign. ‘With people increasingly starting treatment earlier and remaining on treatment for life, patients need better-tolerated first-line treatments as well as affordable second line-therapy for when first-line medicines fail.’ She observed: ‘We know what tools we need to use to help ensure people’s HIV virus can get to undetectable and stay there’. Cohn lamented: ‘But in most of our contexts, they’re priced out of reach.’

Leena Menghaney, Manager of MSF’s Access Campaign in India, commented: ‘There are millions of people without access to treatment, and many of those on treatment need to be switched to newer regimens.’ She observed: ‘If we are to get more people on treatment now, countries need to overcome patent barriers that undermine affordable access to drugs.’ MSF’s annual drug pricing report, Untangling the Web of Antiretroviral Price Reductions, revealed the problems with drug pricing.

There has also been similar controversies in relation to access to medicines for other infectious diseases — such as tuberculosis.

The Medicines Patent Pool has played a helpful role in encouraging access to essential medicines. The organisation was founded in 2010 by UNITAID to increase access to HIV treatment and help encourage co-operation between governments, pharmaceutical companies, and generic manufacturers.

Just before the start of the Melbourne International AIDS Conference, theMedicines Patent Pool announced seven new sub-licensing agreements for the manufacture of generic HIV medicines, atazanavir (ATV) and dolutegravir (DTG).Greg Perry, Executive Director of the Medicines Patent Pool, observed: ‘With licences signed today, four new manufacturers are joining us to speed the availability of crucial medicines, ATV and DTG, to developing countries. This almost doubles our network of generic partners to ten companies’. He said ‘Increased generic competition will ultimately bring prices down and increase availability to allow national treatment programmes to treat many more people in their countries.’

The Australian Government under Tony Abbott has shown a strong interest in supporting medical research. The Medicines Patent Pool could play a useful role in disseminating the benefits of that research across the globe.

UNITAID has expressed deep concerns about the impact of the Trans-Pacific Partnership upon access to essential medicines. The organisation has warned of the dangers of intellectual property provisions in the agreement:

TRIPS-plus provisions also limit or undermine developing countries’ policy options for legislating and using TRIPS flexibilities, even though safeguards and flexibilities were included in the TRIPS Agreement to enable governments to protect public interests, including access to medicines. This has led to concerns that TRIPS-plus provisions in free trade agreements will undermine public health safeguards and objectives—notably access to medicines. These concerns are particularly pertinent with regard to the negotiation of a Trans-Pacific Partnership Agreement, which has been positioned as a “model” for the 21st century—implying that the same or similar provisions are likely to appear in future trade agreements, including those involving developing countries.

In addition to matters of intellectual property, UNITAID has been concerned that patent owners will use the investor-state dispute settlement mechanism to challenge measures related to access to essential medicines. The dispute between Eli Lilly and Canada highlights the dangers of the abuse of investment clauses. Moreover, there has also been concern about the impact of the Trans-Pacific Partnership on drug pricing.

Dr Manica Balasegaram from MSF has similar concerns about the Trans-Pacific Partnership. He has stressed: ‘For the health and well-being of at least 800 million people, countries must reject these terms.’ The Australian Government should ensure that the trade and investment agreements that it negotiates do not undermine global action on access to essential medicines.

HIV/AIDS can trap families, communities, and nations in poverty. The world won’t eradicate poverty without tackling this epidemic decisively.But AIDS is also increasingly a disease of inequalities and exclusion. In Sub-Saharan Africa, perhaps the best macroeconomic predictor of HIV prevalence now is the level of income inequality: the higher the inequality, the higher the rate of HIV.


Helen Clark emphasized that ‘that leadership is vital if bad laws are to be changed’. She stressed that ‘we will support legislators to pass good laws which will turn the tide on HIV.’ Such legislative work is particularly important and critical in the field of intellectual property and access to essential medicines.