NAIROBI, 31st October 2013. Eminent judges and magistrates from several countries in Eastern and Southern Africa have just concluded the first judicial dialogue on HIV and the law. They comprehensively examinedcriminal law and its impact on the management of HIV in the region in the context of the Global Commission on HIV and Law, which identifies the law both as a positive tool for protecting the rights of persons living with HIV, and as a negative tool that can perpetuate stigma and discrimination caused by HIV.

The two-day’ Judicial Dialogue was aimed at promoting the rights based approach by judicial officers in the interpretation of the law in instances where HIV related human rights form an issue for determination in a case. 56 judges and magistrates from Botswana, Burundi, Kenya, Lesotho, Malawi, South Africa, Swaziland, Tanzania, Uganda and Zambia interacted with regional experts on HIV, persons living with HIV, members of key populations and human rights activists in this unique convening. 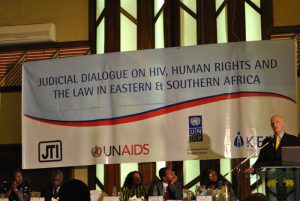 Convened by the Kenya Judiciary Training Institute (JTI) and KELIN in partnership with UNDP and UNAIDS, the meeting was part of efforts to support judges become leaders in the HIV response. Participants stressed the critical role of Judges and courts in protecting people living with and affected by HIV and achieving the UNAIDS vision of ‘zero discrimination’.

Judges and magistrates debated whether the law was an effective tool in deterring the spread of HIV. It was generally accepted that criminal law should be applied narrowly to outrageous actions of transmission, based on scientific evidence. The establishment of clear prosecutorial guidelines was recommended to avoid the existing challenge of overly broad criminalization provisions.

“The fundamental proposition is that most HIV transmissions occur between people who do not know their HIV status and therefore the idea that criminal law will help curb transmission is misguided because criminal law fuels fear and stigma and therefore hampers testing and prevention interventions,” cautioned Justice Edwin Cameron of the Constitutional Court of South Africa.

The highlights were creating an enabling legal environment that would promote human rights for vulnerable groups such as women, youth and children as well as key populations such as sex workers, drug users and sexual minorities. Access to medicines in the region also formed a significant part of the discussions.The law and its institutions can protect the dignity of all people living with HIV and in so doing fortify those most vulnerable to HIV -so called key populations such as men who have sex with men, people who use drugs and sex workers”said UNDP Resident Representative and UN Resident Coordinator, Ms. Nardos Bekele-Thomas, who delivered the key note address at the meeting. . “The law can open the doors to justice when these people’s rights are trampled. By ensuring access to property and protection from all forms of violence, the law can improve women’s lives and give them the power and independence they need to preserve their health and that of their children” she added.

In voicing their commitment to ensuring that justice is served, the participants observed that despite the occurrence of many human rights violations of persons living with HIV, very few of those cases were being presented before the courts.

“Judicial officers appreciate that persons living with HIVare not asking for charity or special considerations: they are asking for justice based on decisions informed by rationale, sound data and science,” observed Prof. Justice Joel Ngugi, the Director of the Judiciary Training Institute, Kenya, in his remarks.

The meeting concluded that an innovative interpretation of the law could form a key tool in advancing the rights of PLHIV in Eastern and Southern Africa. The case studies and experiences shared at the forum provided positive evidence that the judiciary can transform societal views and perceptions on HIV, and influence reduction in HIV related stigma and the resultant discriminatory acts by upholding human rights and public interest.